"Only In America" Part 2

I wont say too much on this one, but in the words of the late great comedian Bernie Mac, all I have to say is "Nuff Said"...In a recent poll "President Barack Obama’s popularity overwhelms that of Jesus Christ, Martin Luther King, and Mother Teresa, according to a new poll that shows Obama as the person Americans named as their hero." 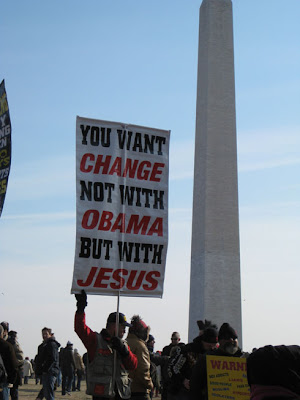 This isn't a heresy hunt this time,...its just foolishness. Im really not too bothered by this article, rather, this headline, because it just proves Romans 1:21-27. The reason this country is the way it is is because men would rather give glory to men than even recognize God as being God. In this article, I think that its total foolishness and blasphemy that people would even put Jesus Christ in the same category as President Obama, Ghandi, Martin Luther King, and Mother Theresa. Jesus Christ is Lord and He is Lord Transcendently,meaning He is totally in a class by Himself.
The error that people, and even many Christians fall into is the error of "inspiriation". Because men are self- centered, we are always looking for something to "inspire" us, something or someone to give us hope. All of these people "inspire us"; people look unto them as inspirational figures who have generated change, and while their influence upon society is a good influence, Jesus Christ does not belong in their company. Why? He is God, and God has done and is doing way more in Jesus Christ than anything that could ever be done in one of these "inspirational figures". Christ did not come to inspire you, He came to radically change you , and if Jesus only inspires you then He hasnt really gotten to you. Many on that day who have been inspired by His name will say "Lord, Lord have we not cast out devils in your name, and done many mighty works in your name, and in return Christ will turn and say to them "Depart from me you workers of iniquity, I never knew you." Christ is not and cannot be just an inspirational figure that you set on the shelf along with all your other historical figures of influence. He is God and there is no one like Him.
God didnt create this universe to just inspire us. He created everything so that He would get glory and be glorified in it. He made the entire universe and all things beyond it and in it for men to fall on their faces and throw themselves upon God Almighty and worship Him and enjoy Him. Its more than just inspiration, because inspiration has to come around every once in a generation. Everyone who is without Him will always need some earthly inspiration and will always look for some mortal to find it in. Obama might inspire you, but only Christ can change you. Ghandi might enlighten your brain with a few proverbial truths, but only God can transform a man by the renewing of his mind. Oprah's benevolence might draw your admiration, but Jesus Christ is the only one who can radically change a man from being an enemy of the Almighty God, both wicked and sinful, and transform him into being a son of God- created after the image of Him in righteousness and true holiness. As long as men are just "inspired", they're still depraved...and are in need of far more than more inspiration. Jesus Christ is the only one who can provide lasting, real change in you and He will never change, yesterday, today and forever...

I will say , in defense of Christ in this poll, although He needs no defending, that Christ is not in a popularity contest. Its actually surprising that He is #2, being that His gospel was rather offensive to most of the people that heard it in His day, and they killed Him for it.... and it seems to offend many today as well. The Media mocks Him, Preachers water down His message in order to appease more sinners, and this country wants to kick Him out of His own holiday...that we made for Him....
In short, Christ is really in no contest with any of this worlds "figures". He is totally in a class by Himself, and on the day of Judgment, it wont really matter if he or some man was your "hero" or not, is He your Lord? Here's a stat for you "inspiration seekers" to chew on:
Obama, Dr.King, Mother Theresa, Kennedy, or anyone else "inspirational" is no closer in essence to Jesus Christ than the smallest atomic particle or the lowest worm under the earths soil. Christ's transcendency places an infinite gap between their "vapor" of glory and His.

Only in America do people refute Christ as God, give Him a Holiday, take Him out of the holiday, call themselves Christians, and then deny that in their lifestyles...all the while claim they are inspired by Him as a person...but persecute those seeking to be like Him.... What did you say Bern?.."Nuff Said"
Posted by Anonymous @ 9:16 AM
Email ThisBlogThis!Share to TwitterShare to FacebookShare to Pinterest