Your Faith Has Made You Well 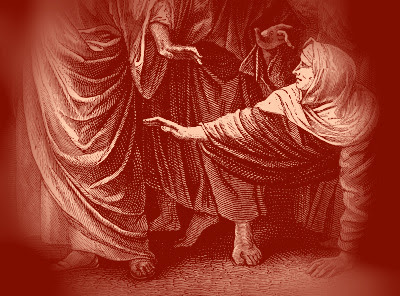 I've often wondered about this statement made by Jesus concerning the woman who touched the hymn of His garment and was made whole. Was it her faith that made her whole or was it her faith that made her whole? The difference between these two statements is huge, as the former suggests that faith is something that we posses which we use to obtain something. The latter statement suggests that it is the belief and trust in someone or something (faith) who is able to do something which we are unable to do in and of ourselves.  R.C. Sproul, in his commentary on the Gospel of Mark, provides some good insight concerning this passage. Mark 5:24-34 says,


And a great crowd followed him and thronged about him. 25 And there was a woman who had had a discharge of blood for twelve years, 26 and who had suffered much under many physicians, and had spent all that she had, and was no better but rather grew worse. 27 She had heard the reports about Jesus and came up behind him in the crowd and touched his garment. 28 For she said, “If I touch even his garments, I will be made well.” 29 And immediately the flow of blood dried up, and she felt in her body that she was healed of her disease. 30 And Jesus, perceiving in himself that power had gone out from him, immediately turned about in the crowd and said, “Who touched my garments?” 31 And his disciples said to him, “You see the crowd pressing around you, and yet you say, ‘Who touched me?’ ” 32 And he looked around to see who had done it. 33 But the woman, knowing what had happened to her, came in fear and trembling and fell down before him and told him the whole truth. 34 And he said to her, “Daughter, your faith has made you well; go in peace, and be healed of your disease.”


What did Jesus say to her? He did not say, "Daughter, your touch has made you well." Neither did he say, "Daughter, My garments have made you well." No. He said, "Daughter, your faith has made you well" (v. 34a). What did He mean? There was no intrinsic power in her faith. Her faith was not the efficient cause of her healing; Jesus was. But her faith was the instrumental cause of her healing. Just as in our justification, God does not declare us righteous because there is any inherent righteousness in our faith, prompting God to say, "Because you have faith, I will save you." No, faith is the instrumental cause of justification because it is the tool or instrument by which we take hold of Christ. Christ is the efficient cause of our justification. In the same way, it was Jesus who healed the woman.

Posted by Unknown @ 9:00 AM
Email ThisBlogThis!Share to TwitterShare to FacebookShare to Pinterest