Another Jesus is exactly what the title describes him as...another Jesus. This false teacher is not another religion, another Mohammed, Bhuddah, Bahai', or Scientologist. Another Jesus is a false teacher who professes to be connected to Jesus Christ in word, and in action. Jesus, in Matthew 24:4, says that one of the "signs of the times" will be that many false Christs will come in His name and they will decieve many people. The false Christ might recognize that he is false, but he probably wont because he has convinced himself that his message is of God; he has convinced himself that although he has some wolf-like tendencies, that he is a sheep.
Jesus said in Matthew 7:15-16, that you will recognize a false prophet by his fruit. Although he looks like a sheep, he is a wolf and although he looks just like all the other trees, his fruit is bad. A bad tree cannot produce good fruit and a wolf cannot stay a sheep but for so long. Here is the key in discerning (by Scripture) a false Christ. Watch his appetite. The major factor in identifying a sheep from a "so-called sheep" is their appetite: the sheep will feed upon what its nature requires it to. Likewise, the wolf will feed upon what its nature requires it to. It will only be so long after grazing in the green pastures that the "disguised sheep" will start to get hungry and because he is a wolf- he will turn to his nature. The appetite of a sheep, one who has heard the voice of his Savior, is the Word, holiness, repentance, Christ, and love. The Christian who has genuinely been saved and regenerated has a passion and a desire for God, they have a passion for holiness and a burning desire, like Paul in Philippians, to know Christ. The false prophets desire is upon earthly things and while the Christian is after the things of God such as holiness, faith, grace and truth- the false Christ is after the things of this world, in the name of God, and unfortunately he decieves many into following after him. 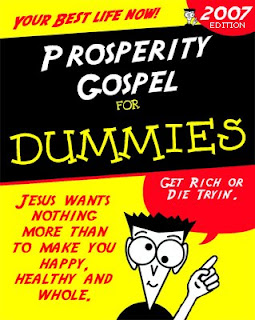 Today we hear many ministers and mainstream evangelists, both on tv before thousands and in pulpits every week, telling anxious crowds that they can put aside thoughts of eternal life and focus on their dreams, desires and passions here and now on the earth. Many, in the name of "prosperity", focus upon getting God to provide earthly things and treasures now.Why? Well because "you're a King's Kid","you walk in a higher anointing" ..."you sowed a miracle-seed" and "you gave God permission to work in the earth-realm"... Some call it "The Kingdom of God", while others call it "A Better You", and "Your Best Life Now" but the bottom line is that the focus is upon self and what God can do for "self"...since He's already done everything else for you anyways(says the false prophet). The aim today is not to point fingers, or to call out names, or even to hate these people with a witch-hunting passion...the point is to take the focus off of men and point them to Christ..to take the focus off of self and glorify the Savior. Its ironic how most of these teachers say that the Holy Spirit is very very operative in their ministries, yet you never hear sermons preached on sin, true righteousness, or judgment and this is His ministry (John 16:8).
Christ, Paul, and the Apostles warn of false teachers several times in the New Testament:

Matthew 7:15
Beware of false prophets which come to you in sheep's clothing but inwardly they are ravening wolves. .

Matthew 24:4-5
And Jesus answered and said unto them, Take heed that no man deceive you.
For many shall come in my name, saying, I am Christ; and shall deceive many.

2 Peter 2:1-3
But there were false prophets also among the people, even as there shall be false teachers among you, who privily shall bring in damnable heresies, even denying the Lord that bought them, and bring upon themselves swift destruction. And many shall follow their pernicious ways; by reason of whom the way of truth shall be evil spoken of. And through covetousness shall they with feigned words make merchandise of you: whose judgment now of a long time lingereth not, and their damnation slumbereth not.

Acts 20:28-31
Take heed therefore unto yourselves, and to all the flock, over the which the Holy Ghost hath made you overseers, to feed the church of God, which he hath purchased with his own blood. For I know this, that after my departing shall grievous wolves enter in among you, not sparing the flock. Also of your own selves shall men arise, speaking perverse things, to draw away disciples after them. Therefore watch, and remember, that by the space of three years I ceased not to warn every one night and day with tears.

These Scriptures are just a few of many that warn of false teachers and all should dilligently search the scriptures to find what are the signs of a false prophet.

The nature of the false prophet is not one of blatant, open all-out falsehood. The false prophet will never just come out spewing heresies that all men know are just wrong and pure evil. What the false prophet says will be heretical, it will be false and it will corrupt, but he does not speak it in a way that sounds as though it will do any damage. Paul in 2 Corinthians 11:3 gives an example of how Satan will work through the message of the false prophet so that he might decieve. "As the serpent beguiled Eve..." is the example given and Paul is referring to Genesis 3:1-4 when Eve was tempted in the garden to eat the fruit forbidden by God. In the sermon, I take a closer look as to how the serpent decieved Eve and essentially he breaks through when he convinces Eve to take the focus off of God's Holy and Just commandment and to place the focus upon her desires, upon her senses, and upon her self.

Gen 3:1-4
Now the serpent was more crafty than any other beast of the field that the LORD God had made.
He said to the woman, "Did God actually say, 'You shall not eat of any tree in the garden'?" 2And the woman said to the serpent, "We may eat of the fruit of the trees in the garden, 3but God said, 'You shall not eat of the fruit of the tree that is in the midst of the garden, neither shall you touch it, lest you die.'" 4 But the serpent said to the woman, "You will not surely die. 5For God knows that when you eat of it your eyes will be opened, and you will be like God, knowing good and evil." 6So when the woman saw that the tree was good for food, and that it was a delight to the eyes, and that the tree was to be desired to make one wise, she took of its fruit and ate, and she also gave some to her husband who was with her, and he ate


Another Jesus doesent seek the glory of the Father, he seeks the glory of himself. as Paul says in 2 Corinthians 11:12 that these false apostles look for an occasion to boast in their works, and in their mission. These false prophets might even seek after godliness, but they only seek after it because of the gain that comes with godliness - their desire to be holy is only motivated from a desire for gain and in the end that is not holiness at all. Paul says in 1 Tim 6:5-6 that there is great gain in godliness...yes, the Lord does bless His people, He does provide their needs and they ought not be anxious like the Gentiles for food or clothing or shelter because those that seek His kingdom and His righteousness will be added to...but this gain that comes with desiring God and seeking after Him with a whole heart also brings contentment with it. Thats how Paul is able to say to the Philippian church (Phil 4:11-13) "11Not that I am speaking of being in need, for I have learned in whatever situation I am to be content. 12I know how to be brought low, and I know how to abound. In any and every circumstance, I have learned the secret of facing plenty and hunger, abundance and need. 13I can do all things through him who strengthens me."

The false prophet is not satisfied or content with contentment. Do you see how the serpent convinced Eve to be dissatisfied with the perfect, God fellowshipping, holy,lifestyle that she and Adam had in the garden? "There has to be more!!" the serpent said, and he convinced her that "more" was found in eating the fruit and fulfilling her desires and wants. The false prophet tells you that "There has to be more" than holiness, righteousness, true worship, and living for Christ....there is a better life now" he says...."You can have whatever you want and your "Daddy in Heaven" will give it to you...He has to because He promised..." I could go on for days...but the point of this is that the false prophets focus is upon the earth while the Christ was focused upon glorifying the Father in Heaven.
Posted by Anonymous @ 8:20 PM
Email ThisBlogThis!Share to TwitterShare to FacebookShare to Pinterest