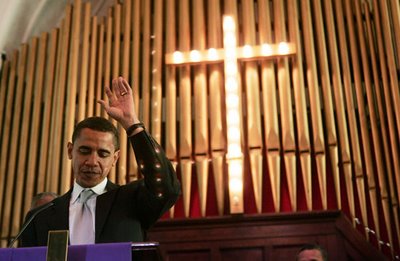 Some comic relief from our friends at Tom in the Box. Classic satire for sure.

WASHINGTON, D.C. -As part of a far-reaching restructuring of the United States of America, President Obama announced on Sunday that he is proposing government-funded salvation.
According to the president, “It just isn’t right that some people are going to be saved while others aren’t. We as a free society have the moral responsibility to see that all people have access to life after death. We, of course, will not force salvation upon anyone. We simply want to make it available to all people.”
After pausing for applause, the president continued, “Some folks will be scared by this plan. They will think we are trying to take away the salvation they already have. I can honestly tell them that we have no desire to do that. We simply want to make eternal life readily accessible to all people regardless of belief, lifestyle choice, or background.”
Obama went on, “Many will ask how we as a government plan to do this. It is a simple matter of restructuring, downsizing, and limiting waste. First, all churches will register with the government. Second, every American citizen (and undocumented worker) will be notified of three churches that are within driving distance of their residence. Third, and finally, churches will be required to accept and offer salvation to all who enter. No one will be denied salvation.”
In conclusion, President Obama said, “We as a nation must take back the moral high ground. How can we take a stand for human rights and at the same time deny salvation to anyone? We must recognize that being saved is a fundamental right that is both implied and promised by the constitution of this great nation. Just as slaves were finally given freedom in the 1860’s, today we are granting both spiritual freedom and salvation to all Americans and others. Regardless of what you believe or how you live, salvation will be yours free of charge.”

Posted by Anonymous @ 3:55 PM
Email ThisBlogThis!Share to TwitterShare to FacebookShare to Pinterest

My thoughts have been adjusted to become just like yours - er - I mean His. Thank you